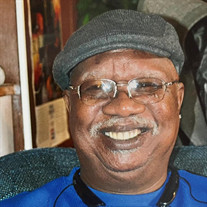 Carl Henry Young, son of the late Getrude Delegar Young Mitchell and James Young Sr. was born September 29, 1946 in Chatham County, Savannah, Ga. Carl was baptized and grew up at Saint Benedict Catholic Church where he was an altar boy and also attended school there. In 1964 he graduated from Sol C. Johnson High School in Savannah, GA. Upon graduating he moved to Denver, Colorado to be with his sister Aosa Houston and her family. Carls life was committed to serving his country however, he had several jobs before being drafted into the United States Army, honorably becoming a Vietnam War veteran. During his time at war he was awarded with several accommodations. After he was discharged from the Army he returned to Denver, Colorado to live a very beautiful and fulfilling life. His determined and capable spirit kept him busy after the military. Professionally Carl lended his skills and talents to Kroger Corporate, retiring at 55 after 30 years of dedicated service. Carl’s life was not all work or service but certainly evolved around love and fellowship. On September 29, 1973 uring a gathering at a friends house, love allowed Carl to meet Charlotte Wilson. Their fellowship with and love for eachother led them to marry not even a full year later on September 29, 1973, producing two children; Brian and Kayla. Carl’s friends and family will well remember his love for all things sports - especially his Denver Broncos and Nuggets. The army in Carl never departed he kept a close ear to the community and his general surroundings by way of his CB radios. Carl’s service to his country was an extension of commitment and service to his family which motivated Carl and Charlottes Atlanta move to be closer to his mother and for health reasons. Carl will be truly missed by family and friends. He was preceded in death by his step-father John Robert Mitchell. He leaves to cherish his memory his wife of 49 years Charlotte; Son, Brian A. Young; daughter, Kayla R. Young; sister Aosa Lee Houston; brother Tony Robert Mitchell (Carol); brother-in-law Jerry see Arnold's (Onetha); sister-in-law, Linda S. Wilson; Grandchildren, Deshawn Young –Davis, Malcolm Young –Barrett, LeiLonnie A. Barrett and a host of family and friends. A Memorial Service will take place Saturday, May 14, 2022, in Denver, Colorado, contact the family for more information.

Carl Henry Young, son of the late Getrude Delegar Young Mitchell and James Young Sr. was born September 29, 1946 in Chatham County, Savannah, Ga. Carl was baptized and grew up at Saint Benedict Catholic Church where he was an altar boy and... View Obituary & Service Information

The family of Mr. Carl H. Young created this Life Tributes page to make it easy to share your memories.

Send flowers to the Young family.