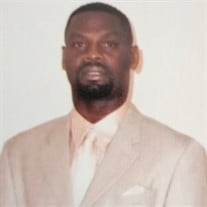 Horace George Stone, affectionately known as “Rock”, graced the world with his presence on December 19th,1958. He was born to parents Augustus Barrington and Gloria Scott, in McCook's Pen, St. Catherine, JA. He is the third oldest in a queue of ten siblings. Horace developed a love for learning early in life and enjoyed going to school even though his attendance was not always consistent. During those absences, he could be found caring for his siblings or helping his mother sell food to the workers at the nearby sugar factory. It was during these early years that he discovered his love of Mathematics and Science; Physics being his favorite. At the age of 15, he found himself out of primary school with his options of higher education non-existent. Not to be deterred, young Horace was able to acquire a meeting with the headmaster of the local electrician school and by the end of the meeting, he had secured his enrollment as the youngest student to attend. At a young age, Horace decided that life had a lot more to offer than his meager beginnings, so he pursued it relentlessly. Upon completion of electrician school, Horace once again found himself at a crossroad where opportunities and employment were scarce. It is at this point that he, at 19 years old, decided to join the military; a decision that completely changed the trajectory of his life. Growth is oftentimes preceded by exposure and that is what being apart of the Jamaica Defense Force (JDF) offered him. Through partnerships with the elite British and American Forces as well as Grenada, Horace was given the opportunity to travel to the United States and the United Kingdom where he developed his craft as an electrical mechanic. He proved himself to be brilliant, a quick study and a charismatic student. Always an overachiever, he graduated at the top of his class from The Corps of Royal Electrical and Mechanical Engineers in the United Kingdom and was the top student of his class at the United States Ordnance Center and School, Maryland, USA. His Commanding Officer in Maryland wrote this, “Sgt Stone was the top student of his class. His attitude, enthusiasm and ability to grasp the technical concepts associated with his training drew praise from many of his instructors. His outstanding performance reflects great credit upon himself and his country.” Not only was he skilled in his chosen career field, but he also most likely missed his calling as a teacher, more specifically a ‘hands-on’ teacher. One of his favorite quotes by Benjamin Franklin, aptly reflects this, “Tell me and I forget, teach me and I may remember, involve me and I learn.” Horace was a lifelong student and was always willing to share his knowledge with those around him that were willing to learn. After eighteen and a half years of service and numerous commendations as well as certifications, he was honorably discharged as Sergeant Horace Stone. In 1996, he migrated to the United States where he resided for twenty-five years. He was able to apply the skills acquired in the military to successfully work his way into supervisory positions in three of the four major companies he worked for in Florida and Georgia. He gained the respect of co-workers and superiors alike because of his work ethic, commitment, and his servant leadership. Of all his achievements, being an exceptional father was his greatest accomplishment. He approached fatherhood the same way he approached everything else in his life, with passion, a can-do attitude, a stiff upper lip, a spirit of excellence, and a heavy dose of love, peppered with laughter. His goal: to ensure that he raised daughters that were well-educated and independent. His love for his girls though not displayed in the traditional sense, was evident in his actions and many sacrifices. Horace was not a perfect father, but he was the best! Horace starred in many roles, but his favorite was “Grandpa.” He had an ear-to-ear smile that was reserved only for Kennedy and Kenneth. He looked forward to their visits and could be caught at any given moment building Lego towers, spoiling them rotten, testing their Mathematical knowledge, or demonstrating the proper way to slide down the stairs. Horace lived a rich life. A life filled with lots of laughter, adventure, and an abundance of Amazon deliveries. He lived a life where saying ‘I love you (he made an exception for his grandchildren), was rare but showing his love was commonplace. He was led by an unwavering passion to give his best and do his best. This is the legacy he leaves behind. Horace has left behind his daughters Deidre Britt (Early) and Dionne Stone. Grandchildren Kennedy Britt, Kenneth Britt, Andre Pommells, Raheem Pommells, and Justin Pommells. Beloved mother Gloria Scott, siblings Byron Clarke, Ralston Stone, Omar Williams, John Pinnock, Shema Williams, Prudence Stone-Watson and Meleta Williams as well as a host of nieces and nephews. He was preceded in death by his beloved Nana and siblings Emzylin Stone and Calvin Scott. A Gathering of Family and Friends will take place Saturday, November 20, 2021, 5 - 7 PM, at Cook Brothers Funeral Directors - 268 NW Broad Street, Fairburn, GA 30213. Mr. Stone will return to his home of St. Catherine, Jamaica for a final farewell celebration. Service details will be available at a later date. Streaming Link: https://youtu.be/6oNzJXrhv60 All family members, friends, and well-wishers are required to wear face masks and follow CDC social distancing guidelines to attend all services.

Horace George Stone, affectionately known as &#8220;Rock&#8221;, graced the world with his presence on December 19th,1958. He was born to parents Augustus Barrington and Gloria Scott, in McCook's Pen, St. Catherine, JA. He is the third oldest... View Obituary & Service Information

The family of Horace George Stone created this Life Tributes page to make it easy to share your memories.

Send flowers to the Stone family.