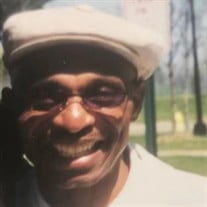 Kaven Yubar McCoy was born on December 24, 1948 in Greenville, South Carolina. At a young age his family relocated to Buffalo, New York and some years later, his father and mother, Alvin and Catherine Brooks, moved the family to Detroit, Michigan. Though he was only a young boy when he moved to Detroit, he held fond memories of the years spent in Buffalo. For many years after moving to Detroit, Kaven and his sister Teena would spend their summers in Buffalo going to the movies with their favorite Aunt Frances (Auntie) and their Uncle Horace, who regaled them with storytelling and jokes. Kaven was employed with Chrysler as an auto line technician for 34 years. While employed at Chrysler, Kaven attended Michigan Barber School where he obtained a license as a Master Barber and began barbering part-time. He retired from Chrysler in June of 2002 and in December of 2003 he relocated his family to Atlanta, Georgia, where he continued barbering until 2020. Kaven had a zest for life! He was passionate about many things – among them was an appreciation for sports. He was an avid track & field, tennis and baseball enthusiast, but his most beloved sport was boxing. He would often spend hours replaying major fights over and over, critiquing fighters’ techniques. Kaven also enjoyed running and could be seen jogging throughout Detroit from the westside where he lived, to the eastside where he worked. Arising early in the morning to run from his home to work at Chrysler on Mack Avenue, then leaving after his shift and running the distance back home. He usually ran the same route every day, and over the years many people along that route began recognizing him, naming Kaven “the runner”, shouting “there goes that runner…” or “you betta’ run boy!” Kaven had a taste for the finer things in life, as well as life’s simplicities. Such as the joy of devouring sweets and took great pleasure in the baked delicacies of his mom, auntie and his wife Delores – whom he affectionately called (by her middle name) “Marie”. He was knowledgeable about many things and possessed a personality blessed with flair! His finesse in style – always impeccably dressed – was among them. He knew the quality and authenticity of every shoe he was fitted for, or sports coat and hat he donned. It was an art form Kaven valued as one of life’s simple pleasures. He enjoyed all of what was meaningful in his life to the fullest! From barbershop talk to playing the dozens or debating with his brothers-in-law during family reunions, vacations, events or celebrations. He valued life and loved a great story! Whether he was the one storytelling or listening with visual intensity to someone else sharing…good stories were a delight to him. His capacity to engage thought provoking imageries over freshly baked desserts was a tale within itself. Kaven lived a life filled with intimate memories, witty anecdotes, and remarkable quotes that often-included what life was like growing up in comparison to today’s ever-changing times. Many of those stories included his values and a deep appreciation for love of family which reached beyond his children and grandchildren to include nieces, nephews, and children of friends. He was always excited about everything they were engaged in that expanded their knowledge or seeded their greatness. He was undisputedly a huge fan and great moral supporter. Kaven was not an arrogant man, but you will never meet a prouder father or grandfather! Kaven was a Motown loyalist – an enjoyment he passed on to his children and grandchildren - who share his love and knowledge of old school R & B. But no R & B or Motown legend were more influential to Kaven than his all-time favorite Gospel recording group, “The Winans”. Kaven accepted Jesus Christ as his Lord and Saviour in 1979 and was baptized at Messiah Missionary Baptist Church in Detroit, Michigan. In the Spring of 1980 Kaven married Delores Marie Mims and along with his sons, Shawntee’ Yubar and Damon Justin, began a family that later included the births of their daughters, DaSha Simone’ and Ashley Joy Marie – better known as “The Real McCoys”. March 22, 2021 commemorated 41 years of matrimony for Kaven and Delores (Lois) Marie. Kaven was a man’s man who loved his wife and children and believed there was nothing else greater under God than family. Every decision he made was with his family in mind, whether as protector and provider or simple as birthday celebrations, summer vacations, participating in his children’s activities, or weekly date nights with his wife, all were predicated on his love for, and servitude to, his family. That Love and concern for family extended to time spent with his mother and father sitting on their front porch talking and laughing – enjoying one another’s company. Good times with his siblings were especially memorable to Kaven and he cherished those special times with his brother Trent, and sisters Teena and Tracy; and the countless times they laughed together or numerous topics they debated: on everything And absolutely nothing! Kaven leaves a legacy of memories of commitment, laughter and love. He leaves to cherish those memories his beloved wife, Marie; children, Shawntee’ Yubar (Delon), Damon Justin (Tasha), DaSha Simone’ and Ashley Joy Marie; grandsons, Shawntee Yubar, Antonio, Chammond Kaven, and Damon Justin, Jr.; parents, Alvin and Catherine Brooks; an aunt, Frances Graham; a brother, Trent Brooks (Rebecca); a sister, Teena (Roscoe) Thomas; a sister, Tracy Brady; nephews, Ian and Evan Thomas, and Aldrin Brooks; nieces, Trenese (daughter Troi) and Shanel (daughter Carrington); and a host of in-laws, aunts, uncles, nieces, nephews, cousins and friends. A memorial service celebrating his life will take place Saturday, April 17, 2021, 11 AM, at Cook Brothers Funeral Directors - 268 NW Broad Street, Fairburn, GA 30213. All family members, friends and well-wishers are required to wear face masks and follow CDC social distancing guidelines to attend all services. Streaming Link: https://youtu.be/awB_f3M70p4

Kaven Yubar McCoy was born on December 24, 1948 in Greenville, South Carolina. At a young age his family relocated to Buffalo, New York and some years later, his father and mother, Alvin and Catherine Brooks, moved the family to Detroit, Michigan.... View Obituary & Service Information

The family of Kaven Yubar McCoy created this Life Tributes page to make it easy to share your memories.

Send flowers to the McCoy family.