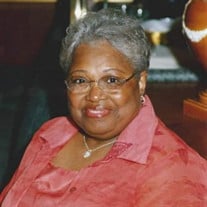 Regina R Patton was born Feb 11, 1937 to Evangelist Alice Mae Franklin and Richard Robert Franklin. She was the joy of their lives, their first-born child of two, with her brother Frederic Franklin being born the following year. Regina was born into a devout Christian Family where she was christened and baptized at the All Nations Pentecostal Church under the direction of Pastor Lucy Smith, later succeeded by Pastor Dixon. God led her to Christian Tabernacle Church where she rededicated her life to Christ and was re-baptized under the leadership of Pastor Maceo Woods. After being there for 20 years, she later joined True Rock Ministry, Pastor Earl Grandberry, and her last church, New Life Covenant, Pastor John Hannah. Regina loved each one of her churches. God had shown her, there was purpose for each church that she attended which all took her to another level in God, assisting in her growth in Christ. She began her education at Fuller Elementary School from 1943-1950. Next, she attended Hyde Park High School from 1950-1954. She worked various jobs at DeMets Candy and Spiegel before enrolling in the Man-Power Development Training in 1963. She graduated at the top of her class typing 74 wpm and dictation of 110 wpm. She held various jobs in the secretarial field until she landed her dream job at Chicago Board of Education as a principle clerk on September 4, 1973. She elevated thru the ranks becoming Office Administrative Assistant. She loved her job and through her kindness and commitment to helping others, she brought many of her sons and daughters into the company. Regina made lifetime friends there, in which she communicated with until she could no more. She retired after 24 years on June 14, 1997 and enjoyed 23 wonderful years of retirement. Regina married Wesley Patton (deceased) and bore 2 children, Debra and Steven (deceased) which ended 4 years later. She reconnected with her high school sweetheart Michael Cook (deceased) and Cheryl was born and then 10 years later, her last child, Kimberley with Ardee Stephens (deceased). Regina means Queen and that Queen ruled her kingdom with honor, the love of God and the Word. She was a strong, stern and Godly matriarch whose favorite passage was Proverbs 3:5-6, which all her children had to quote daily. She loved them, their offspring, her only brother Fred, and her most favorite uncle, Romance Watson, more than life itself and would do anything for them. During her life, she became the Mom/Granny to numerous children she did not bear who all became her babies. She opened her heart to everyone and loved them unconditionally. She was most generous, opening her finances to those in need. She fussed, yet she gave. Her family named her the ATM. Her grandkids thought she was rich because she always had money to shower on them. Mom would say, I am not rich, just Blessed and Highly Favored by God whose been so good to me. She prayed fervently for all she knew rising early in the morning placing all her babies on the altar, asking God to keep them safe from all hurt, harm and dangers, seen and unseen. She posted greetings to them on Facebook (which she loved) and personally called constantly, greeting them with “Hey Baby!!”. Her smile was contagious and so endearing and every one of them loved her back the same. Regina had a collection of almost 1000 movies. She loved westerns. She was also the best baker on this side of heaven. She blessed so many with cakes, pies, tarts, cookies, you name it. Her last cake was made in November, a week prior to her hospitalization. She was busy unpacking in her new forever home when her nephew called requesting a German Chocolate cake. She stopped everything, got up and prepared all the ingredients. Her nephew drove 3 hours from Tennessee and 3 hours back to his hotel, just to have Granny’s cake. That is how much love she had for her babies and how much love they had for her. It has pleased the Almighty God to take from this walk of life, a Servant of God, Regina R Patton, who went to eternal sleep in Jesus on Tuesday, 12/15/20 at 1:30 am after a brief illness. Queen Regina left this earthly home for a new heavenly home to join those she cherished who preceded her in death, Mother and father Alice and Richard, son Steven, grandson Terrence, and great grandson, Jaiden. On this earth, she leaves to cherish her life, brother Frederic Franklin (Aileen), children Debra Eileen Slaughter (Michael), Winston Harding, Cheryl Rene Patton, Ernestine Sally (Milton), Kimberley Alice Patton; grandchildren Robert Lenard Patton (Valerie), Dante Steven Patton, Regina Lanette Patton, Mychal Davis, Daniel Tyrone Bronson, Danielle Kathryn Bronson, Stephanie Rose Patton, Juwan Christopher Allen; a host of great-grandchildren, one nephew, one niece, cousins, one uncle Romance Watson (Philadelphia PA) and one Aunt Florine Willis (Redwood CA), best friend for 70 years, Myrna Edwards, prayer partner, Theloris Ipaye and a host of more adopted children and friends. Public viewing will be held on Tuesday, December 29, 2020, 1:00 PM - 6:00 PM, at Cook Brothers Funeral Directors - 268 NW Broad Street, Fairburn, GA 30213. A funeral service celebrating her life will take place Wednesday, December 30, 2020, 2 PM, in the chapel. All family members, friends and well-wishers are required to wear face masks to attend both. Streaming link: https://youtu.be/N8t3oTBXgDc

Regina R Patton was born Feb 11, 1937 to Evangelist Alice Mae Franklin and Richard Robert Franklin. She was the joy of their lives, their first-born child of two, with her brother Frederic Franklin being born the following year. Regina was... View Obituary & Service Information

The family of Regina Roberta Patton created this Life Tributes page to make it easy to share your memories.

Send flowers to the Patton family.