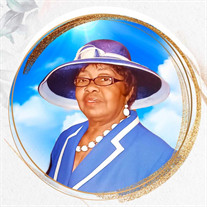 Born December 21 1936, in Lake Charles Louisiana, Selena was the second daughter added to the Union of Avner Young and Alicia (Alice) Daniel. The untimely death of her father Avner, in 1938 left her mother Alice alone to raise Selena the youngest... View Obituary & Service Information

The family of Mother Selena Hills-Baker created this Life Tributes page to make it easy to share your memories.

Send flowers to the Hills-Baker family.